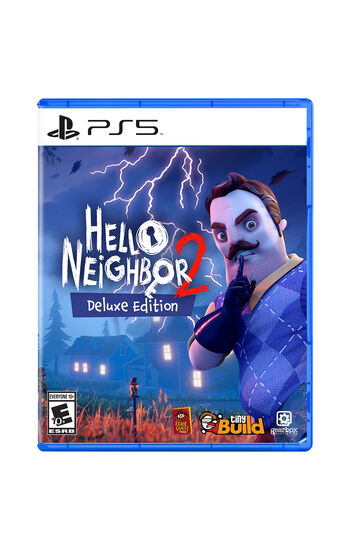 Can you trust your neighbors? Think again. Hello Neighbor 2 is a sequel to a smash hit Hello Neighbor, where you sneak into your neighbor's house and figure out what he's hiding in the basement. In part 2 we have gone even further, and as a journalist, you investigate murders and mysterious disappearances in a seemingly quiet town of Raven Brooks. Hello Neighbor 2 is a stealth horror game about digging up your creepy neighbor’s secrets. Imagine that the entire town with all the houses and AI-driven inhabitants is your playground. Oh and there’s something off about inhabitants in Raven Brooks, but you can’t quite put your finger on it. So you think smart, plan your ingress, and look for clues behind the shut curtains of a suburban dystopia. To start playing Hello Neighbor 2 you need to walk down the streets of Raven Brooks sandbox world and watch the AI characters' life, look through the windows to find clues. It feels like an investigative journalist simulator, huh? What’s in the attic of a local taxidermist? Why does this gentleman with a moustache go down to the amusement park every night? Which secrets does the mayor’s study hold? These are just a small part of the questions you might ask yourself. The best tactical move, however, is to sneak around, discover the ways to outsmart NPCs to learn their secrets and get a real scoop that will uncover the big mystery hidden in Raven Brooks. The twist is that every character in Hello Neighbor 2 is powered by a neural network AI, learning from the players, doing everything in their power to protect their gated community and its secrets. Will you pull down the veil?